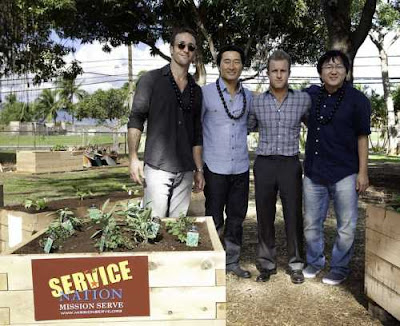 ... my son's elementary school is located on base.  It is an "open" campus with outside access to each classroom.  Two weeks ago, the PTO requested volunteers for a "gardening" project on Sunday, November 13, at 8 am.   The early morning adventure paid off as it was part of Service Nation's 11 projects across the country to honor Veterans' Day.  From its website at www.servicenation.org,

A campaign to inspire a new era of voluntary citizen service in America.

As we packed up the tools, Service Nation's organizer, Chris, announced that the students would plant fruit, vegetables, and native Hawaiian plants as part of a day long event, including an outdoor assembly with

On Monday morning, I arrived 45 minutes before the outdoor assembly.  As their vans approached the school, I crossed the street to stand behind the students selected to welcome the cast with Kukui nut leis.   It was somewhat surreal to watch the cast exit the vans like normal people.  Unlike the rabid fans at the H5O premiere on Waikiki Beach, nobody was screaming at Hickam Elementary.


I kept my eye on the VIP room where they met school officials.   When they reemerged and walked toward the new garden, I followed as if I was suppose to be there.   Alex and Scott worked together with students in one flower bed while Daniel and Masi worked together in another.  These guys were great with the students, asking them questions and praising their efforts.


Alex, of course, spoke in his native Aussie accent.  He challenged Daniel and Masi to a "garden off" to see who  had the best garden.  As the cast walked towards the assembly area, I was walking behind Alex - what a sight!  Let me say it again, it was surreal.   It was clear that the cast was there for the kids so I didn't ask to take a picture with them .... just yet.


During the assembly, we learned at the American Heart Association sponsored The Teaching Garden and would be working with the Bishop Museum (Hawaii's own cultural icon) to maintain the native plants.   The principal then introduced Laird Hamilton - Hawaii's own surfing enthusiast.  He talked about the importance of good nutrition and giving the best fuel to your best vehicle - your body, "Take care of your body and your body will talk care of you."


Laird introduced his wife, Gabrielle Reece, who led the students in "playing", i.e., exercising.  The H50 cast laughed as the kids went wild under Gabrielle's direction.  She then introduced Daniel Dae Kim at the podium while Alex, Scott, and Masi pushed wheelbarrows in front of the stage, one was filled with vegetables, one was filled with fruit, and one was filled with books.   Daniel shared how he would apply what he learned today from The Teaching Garden to his own effort plant a coconut tree.  He then challenged the children to take care of their own "trees" - bodies - and even their "coconuts" - heads - by filling them with knowledge from school.  The producers of Hawaii Five O donated the books in the wheelbarrow.

Check out the video of their presentation at this link. 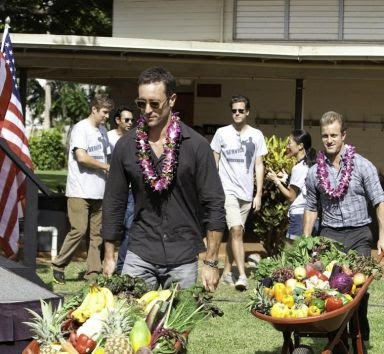 The students moved to an open area to perform their "grow" dance to Black Eyed Peas' I'VE GOT A FEELING.   Some very smart military personnel created a line to take pictures with the cast.  Just as it was my turn to pose with Alex, another woman thought it was her turn.  Normally I would have let the other woman go first, but I had a mission that day! 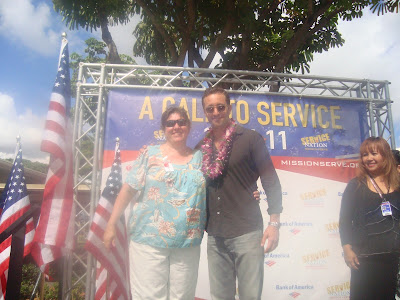 I also took a picture with Scott. 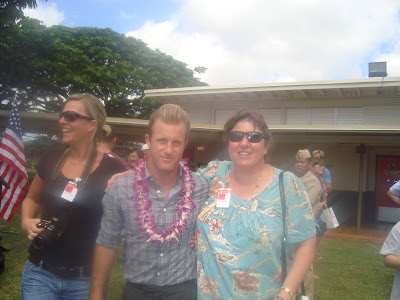 My son asked Scott for his autograph. 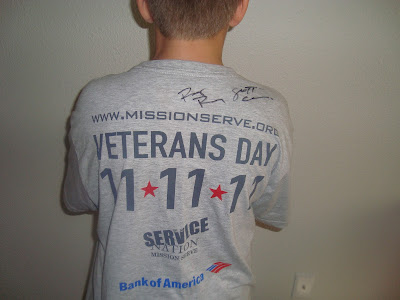 Just as the crew was getting ready to leave, I spotted Masi walking in my direction.   I asked a woman nearby to take my picture - I think the woman was Daniel's wife. 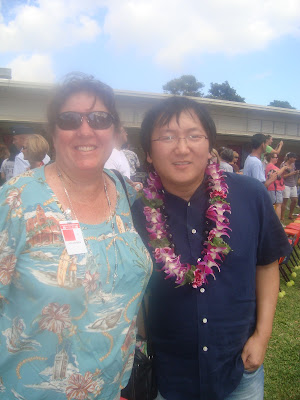 The generals' spouses were interested in The Teaching Garden so I escorted them to it.  I didn't want to watch (and cry) as the H50 crew left.

Have you met a famous person? 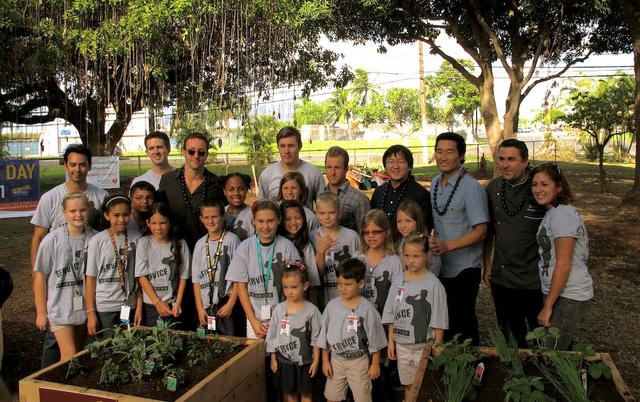